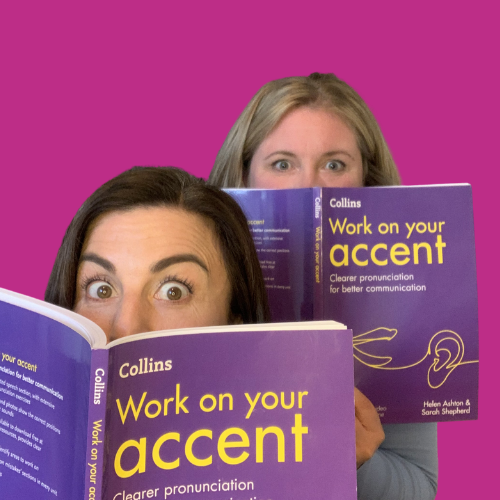 Work On Your Accent is the best-selling EFL book by US!

Way back in 2010 we were just two young accent and dialect coaches with one big idea: we wanted to create a simple step-by step accent guide for people who spoke English as a second or other language to help them speak clearly without losing their identity and being forced to sound like a member of the Royal Family in 1860. We recognised there was a gap in the English teaching market for a text book for adults that used a modern accent that covered the most important parts of accent work: intelligibility and fluency.

We wanted to use a combination of audio, video and drawings to explain sounds and features of English in a simple way that allowed learners to really focus in on the individual areas where they needed to practise the most.

Luckily for us, Harper Collins agreed and in 2012 the first edition of Work On Your Accent was published.

WOYA (what the cool kids call it) went on to be a bestseller in the English as a Foreign Language subject on Amazon. But we knew we could do even MORE, and now we have the second edition.

In this edition we listened to feedback from WOYA fans and have dramatically expanded every section so there’s much more practise material and the connected speech section makes up almost a third of this book.

If your English accent isn’t where you want it to be, this is the perfect book for you. You'll see and hear how to soften the influence of your mother tongue and speak clear English that everyone will understand whilst retaining as much of your own sound as you wish.

In this book we show you how to pronounce each individual sound, and speech feature and when to use them. We help you to recognise why your native language makes you mispronounce certain sounds and which sounds you need to focus on for clarity.

This new and greatly expanded edition makes it even easier to speak clear English, with more practice material and improved sections on stress and intonation, connected speech and consonant clusters. It also includes a new visual questionnaire, in the form of a map, to help you identify which parts of the book are most relevant for you, based on your mother tongue.

We look at each speech feature on it’s own - including common mistakes - before putting it all together in the connected speech section.

Perfect for getting you started on your accent journey